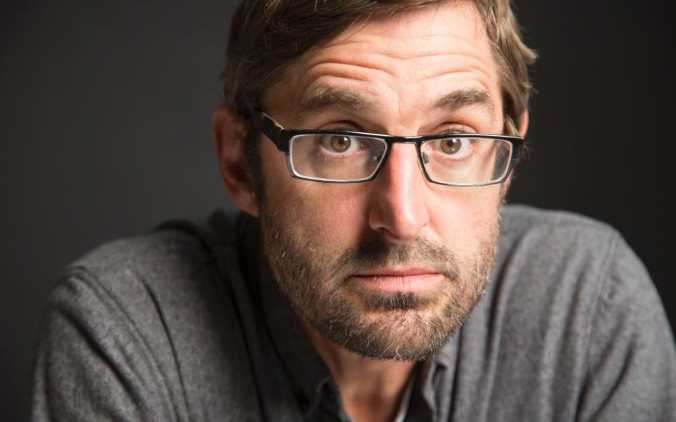 Today I’m featuring a man who has made a vast variety of interesting documentaries on unusual topics across the world and has made an impression on me by the way with the way he asks his questions: he seems to ask the right ones. One could almost call him the king of documentaries and interviewees always seem at ease and comfortable sharing things they wouldn’t share with others. This sincere bespectacled English eccentric is very nonjudgmental in his approach and he touches well on the sensitive sides of matters and seemingly bonds effortlessly with most people.

Louis Sebastian Theroux (May 1970) is a British-American documentary filmmaker, journalist, broadcaster, and author. He has received two British Academy Television Awards and a Royal Television Society Television Award.
Born in Singapore to an English mother and American father (the writer Paul Theroux), Theroux moved with his family to London when he was a child. After graduating from Oxford, he moved to the U.S. and worked as a journalist for Metro Silicon Valley and Spy. He moved into television as the presenter of offbeat segments on Michael Moore’s TV Nation series and later began to host his own documentaries, including Louis Theroux’s Weird Weekends, When Louis Met…, and several BBC Two specials.

Louis Sebastian Theroux was born in Singapore on 20 May 1970, the son of American travel writer and novelist Paul Theroux and his English then-wife Anne (née Castle). His paternal grandmother, Anne (née Dittami), was an Italian-American grammar school teacher, and his paternal grandfather, Albert Eugène Theroux, was French-Canadian and a salesman for the American Leather Oak company.[8] He holds both British and American citizenship. His older brother, Marcel, is a writer and television presenter. His cousin, Justin, is an actor and screenwriter. Theroux is the nephew of novelist Alexander Theroux and writer Peter Theroux.
Theroux moved with his family to England at the age of one, and was brought up in London. He was educated at Tower House School and then at Westminster School, a public school within the precincts of Westminster Abbey. While there, he became friends with comedians Adam Buxton and Joe Cornish,and the Liberal Democrat politician Nick Clegg, with whom he travelled to America. He also performed in a number of school theatre productions including Bugsy Malone as Looney Bergonzi, Ritual for Dolls as the Army Officer, and The Splendour Falls as the Minstrel. Theroux later read Modern History at Magdalen College, Oxford (1988–1991), graduating with first-class honours.

Theroux’s first employment as a journalist was in the United States with Metro Silicon Valley, an alternative free weekly newspaper in San Jose, California. In 1992, he was hired as a writer for Spy magazine. He also worked as a correspondent on Michael Moore’s TV Nation series, for which he provided segments on off-beat cultural subjects, including selling Avon to women in the Amazon Rainforest, the Jerusalem syndrome, and attempts by the Ku Klux Klan to rebrand itself as a civil rights group for white people.
When TV Nation ended, Theroux was signed to a development deal by the BBC, through which he developed Louis Theroux’s Weird Weekends. He has guest-written for a number of publications, including Hip Hop Connection, and he continues to write for The Idler.

In Weird Weekends (1998–2000), Theroux followed marginal (mostly American) subcultures such as survivalists, black nationalists, white supremacists, and porn stars, often by living among or close to the people involved. His documentary method often subtly exposed the contradictions or farcical elements of some seriously held beliefs. He described the aim of the series as:
Setting out to discover the genuinely odd in the most ordinary setting. To me, it’s almost a privilege to be welcomed into these communities and to shine a light on them and, maybe, through my enthusiasm, to get people to reveal more of themselves than they may have intended. The show is laughing at me, adrift in their world, as much as at them. I don’t have to play up that stuff. I’m not a matinee idol disguised as a nerd.

In the series When Louis Met… (2000–02), Theroux accompanied a different British celebrity in each programme in their daily lives, interviewing them as they go. His episode about British entertainer Jimmy Savile, When Louis Met Jimmy, was voted one of the top documentaries of all time in a 2005 survey by Britain’s Channel 4. Some years after the episode was filmed, the NSPCC described Savile as one of the most prolific sex offenders in Great Britain.
In an interview in 2015, Theroux expressed his intention to produce a follow-up documentary about Savile for the BBC to explore how the late entertainer had continued his abuse for so long, to meet people he knew closely, and examine his own reflections on his inability to dig more deeply into the first case. This follow-up documentary, with the title Savile, aired on BBC Two on Sunday, 2 October 2016, and lasted 1 hour, 15 minutes.
In When Louis Met the Hamiltons, the former Conservative MP Neil Hamilton and his wife Christine were arrested during the course of filming, due to false allegations of indecent assault.
In When Louis Met Max Clifford, Max Clifford tried to set up Theroux, but he was caught lying as the crew recorded his live microphone during the conversations.
After this series concluded, a retrospective called Life with Louis was released. Theroux made a documentary called Louis, Martin & Michael about his quest to get an interview with Michael Jackson. Selected episodes of When Louis Met… were included as bonus content on a Best-Of collection of Weird Weekends.

In these special programmes, beginning in 2003, Theroux returned to American themes, working at feature-length and in a more natural way. In March 2006, he signed a new deal with the BBC to make 10 films over the course of three years. Subjects for the specials include criminal gangs in Lagos, Neo-Nazis in America, ultra-Zionists in Israel. He also visits child psychiatry, and the prison systems in California and Florida. A 2007 special, The Most Hated Family in America, received strong critical praise from the international media.

In October 2016, Theroux premiered a feature length documentary entitled My Scientology Movie. Produced by Simon Chinn—a schoolfriend of Theroux’s—and directed by John Dower, the film covers Theroux attempting to gain access to the secretive Church of Scientology. The film premiered at the London Film Festival in 2015 and was released in cinemas in the UK on 7 October 2016.

Theroux published his first book, The Call of the Weird: Travels in American Subcultures, in Britain in 2005. In it he recounts his return to the United States to learn about the lives of some of the people he had featured in his television programmes.Theroux also released an autobiography titled Gotta Get Theroux This in September 2019.

In April 2020, during a lockdown because of the COVID-19 pandemic, Theroux started the BBC Radio 4 podcast Grounded with Louis Theroux, recorded at his home, where he interviews well known people that he finds particularly fascinating, who he would not necessarily have had a chance to speak to before the pandemic

Theroux makes a few appearances on The Adam and Joe Show DVD and has been a guest many times on Adam & Joe’s radio shows as well as on The Adam Buxton Podcast.
As part of the Weird Weekends episode “Porn”, Theroux agreed to film a cameo in the 1997 gay pornography film Take a Peak. He did not perform sexual acts in the film, but made a brief appearance as a park ranger in search of a criminal. In the Weird Weekends episode “Infomercials”, he was featured as a live salesman for an at-home paper shredder for the Home Shopping Network.
In December 2015 Theroux captained the team representing Magdalen College, Oxford, on BBC Four’s Christmas University Challenge. In their first-round match the team beat University of Exeter by 220 to 130 and Theroux’s team went on to win the tournament.

Theroux’s first marriage was to Susanna Kleeman from 1998 to 2001; he later told Sathnam Sanghera of the Financial Times, “What happened was that my girlfriend was living with me in New York. She was having trouble finding work … legally. So we got married, to make it easier for her. We never really considered ourselves married in the full sense – there were no wedding photos or anything like that. It was really a marriage of convenience.”
While filming a 2011 BBC programme, Theroux was asked “Why pose a difference between religion and ethics?” He responded, “Because I don’t believe in God.” In his 2011 documentary, The Ultra Zionists, he confirmed his atheism. In a 2012 masterclass, Theroux spoke of the challenges of combining family life with the need to go away to work on projects.
Theroux married longtime girlfriend Nancy Strang on 13 July 2012. They have three sons. He and his family lived in Harlesden, London until they temporarily moved to Los Angeles, California in early 2013, allowing him more time to focus on his LA Stories series. In August 2017, Theroux again relocated to Los Angeles.
In 2018 Theroux was targeted by cyber security firm Insinia to highlight a longstanding security flaw in Twitter’s system.
During a 2018 interview with The Guardian, he revealed that he was a nervous flyer.
Theroux has stated that while he acknowledges that it is an intoxicant and can be a trigger to mental health issues, he supports the legalisation of cannabis.

This incredibly good journalist knows there are boundaries and things he shouldn’t cross. He blends in well and is an easy confidant to all. There is a sense, watching Theroux talk to the people in his interviews, that he’s not putting words in their mouths but is instead drawing out something they already want to say. This geeky, nerdy-looking Brit is a national treasure.